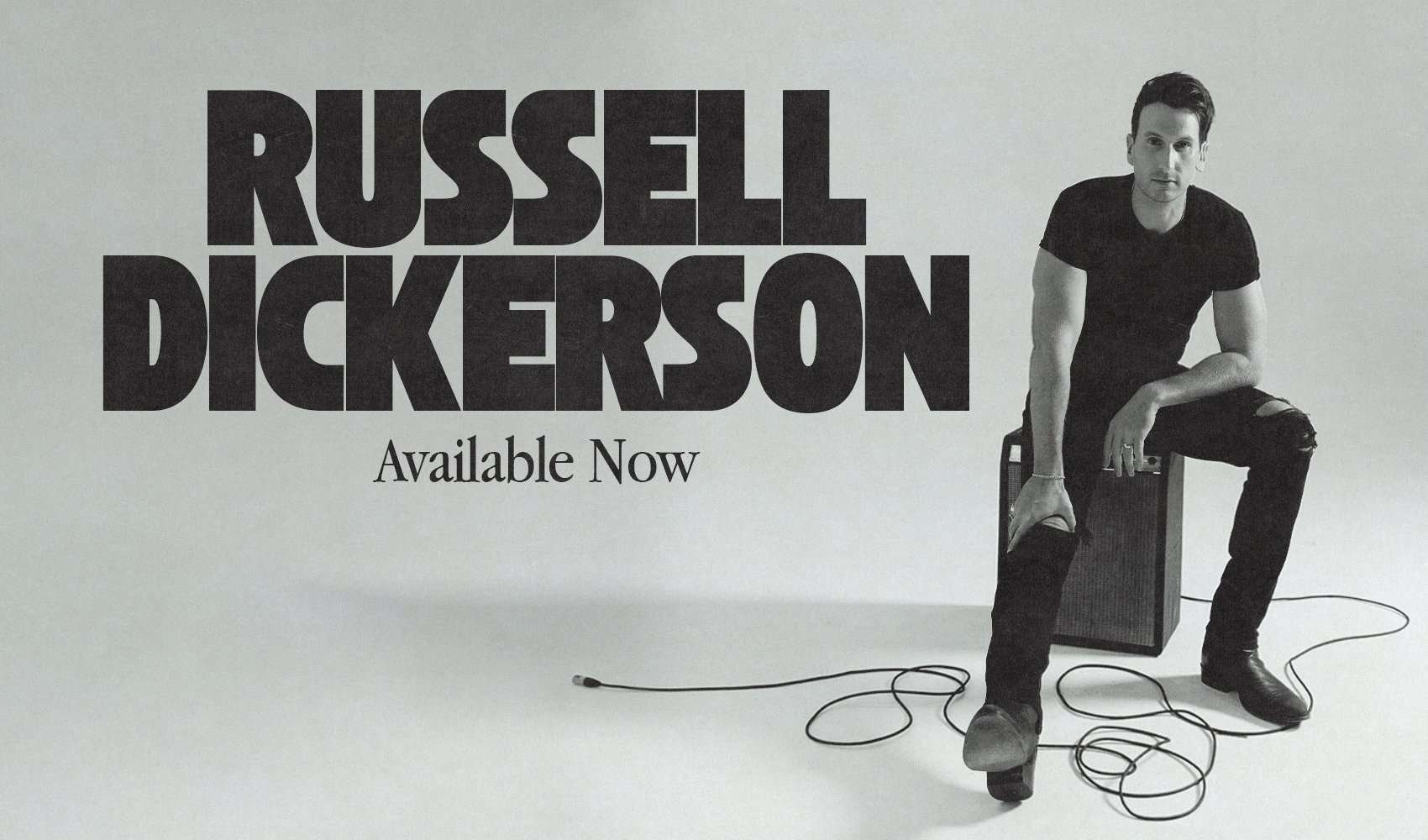 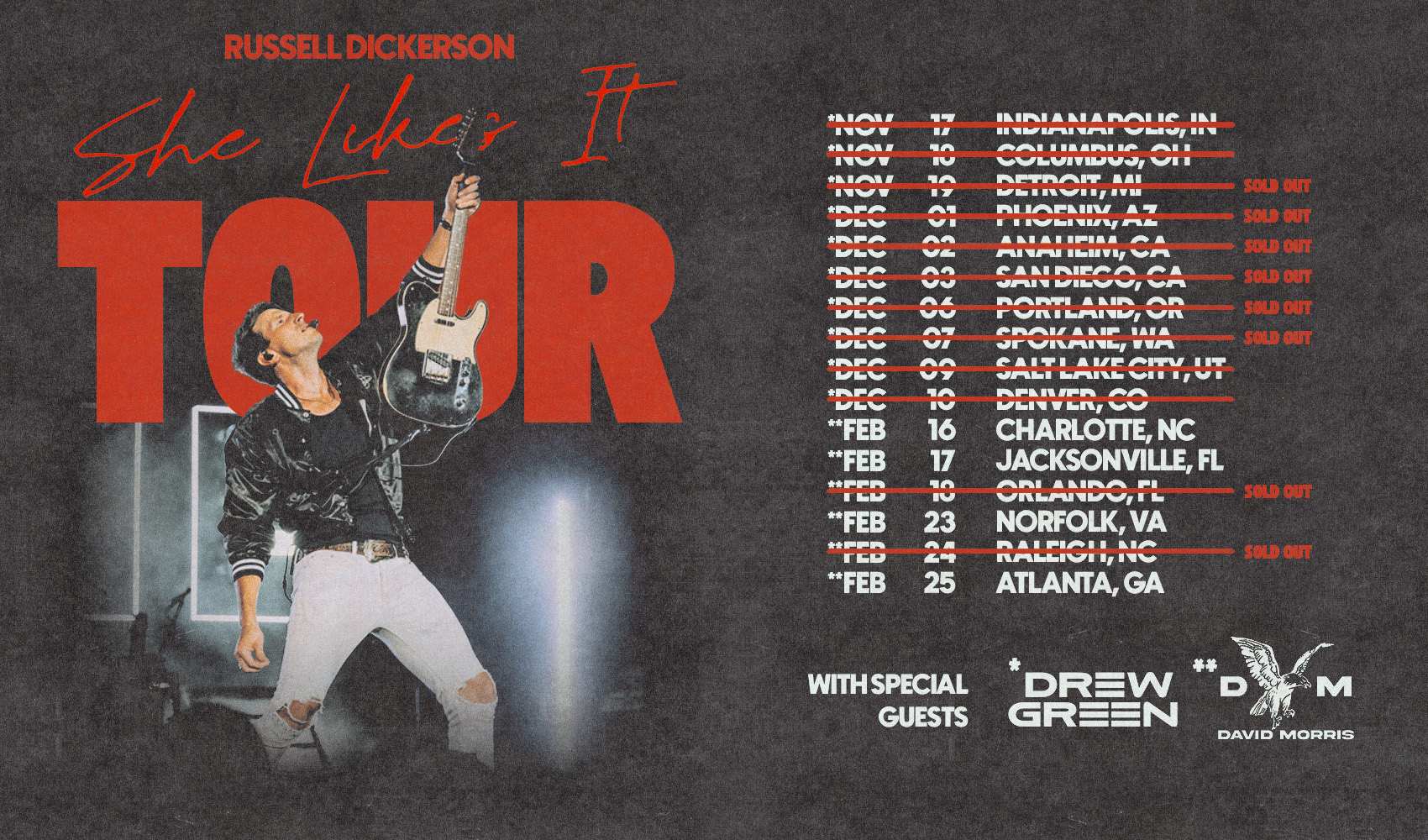 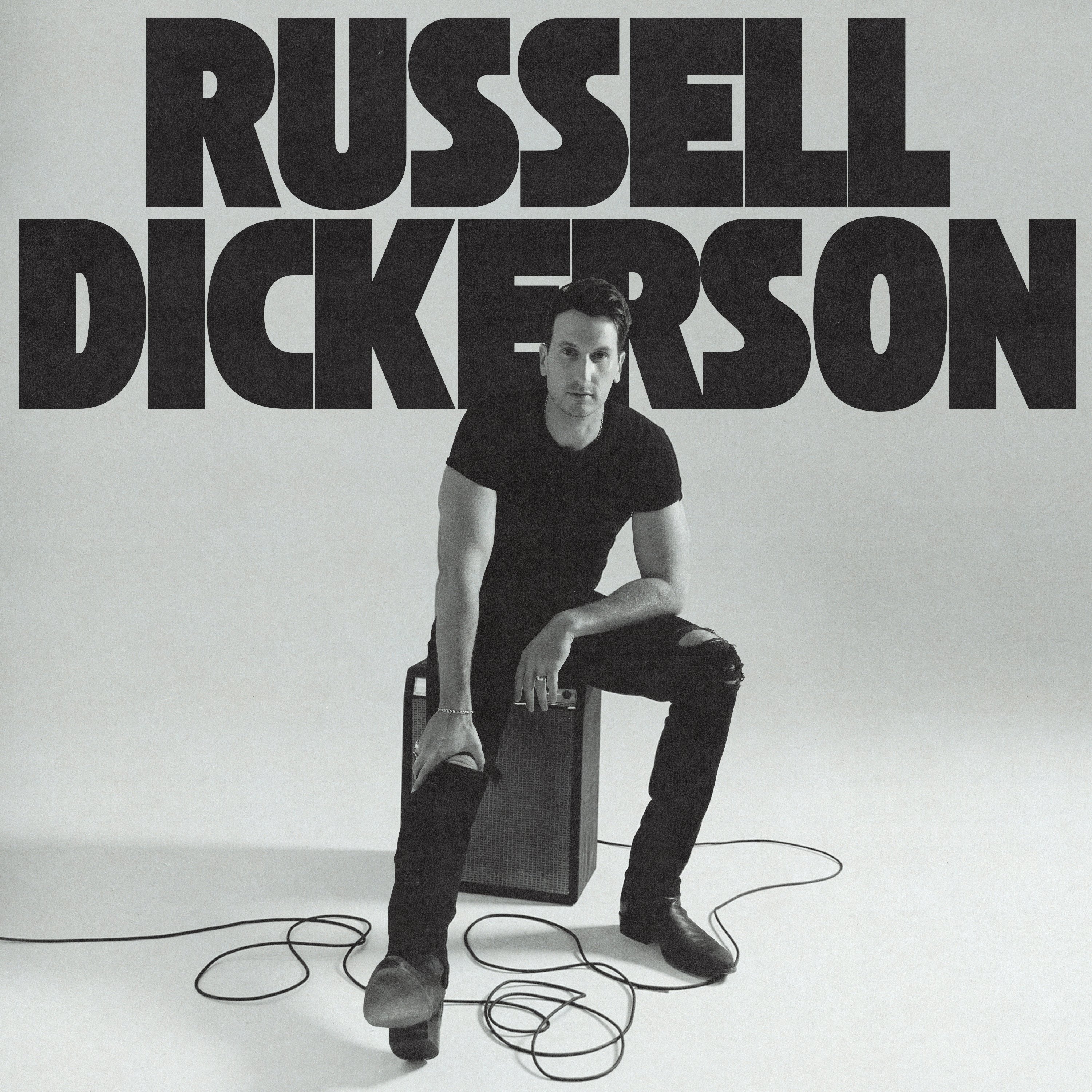 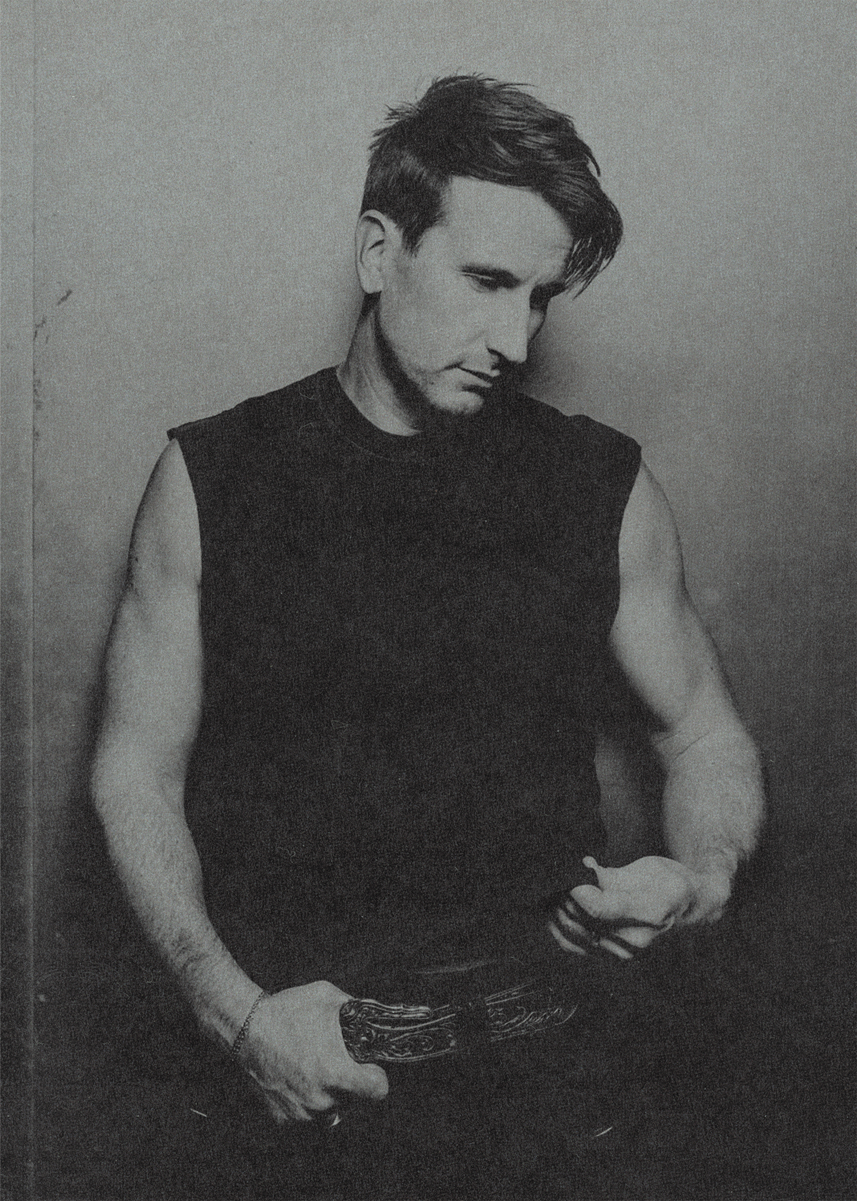 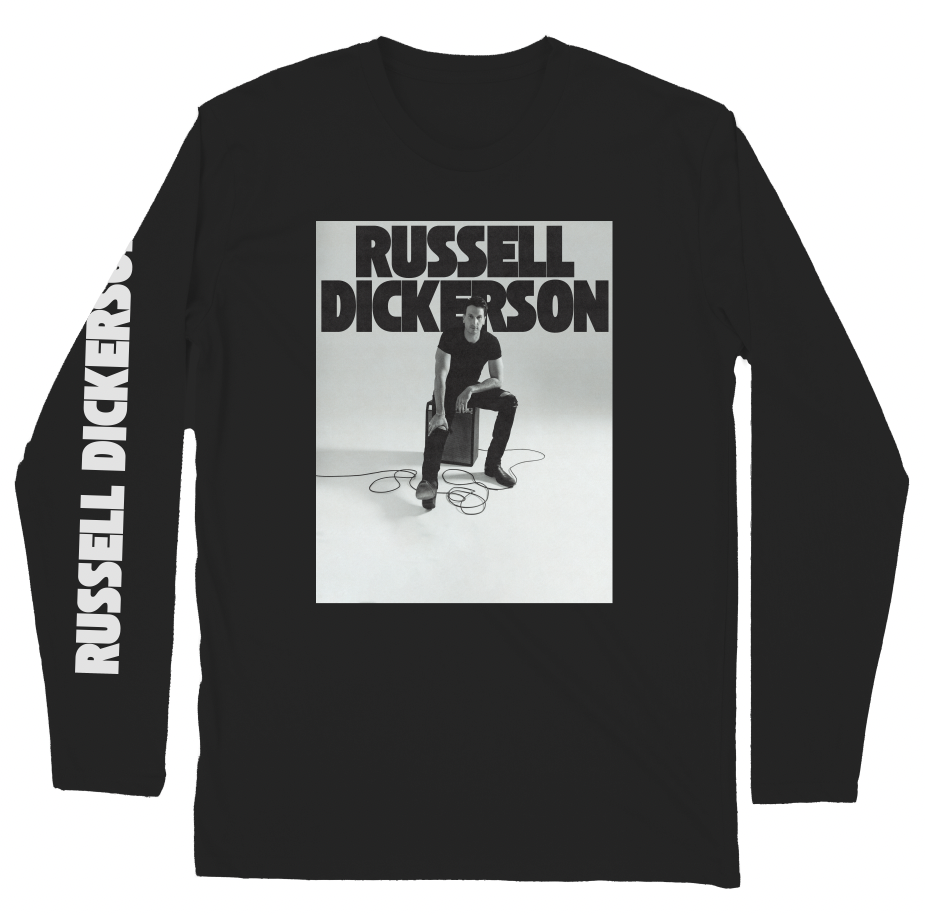 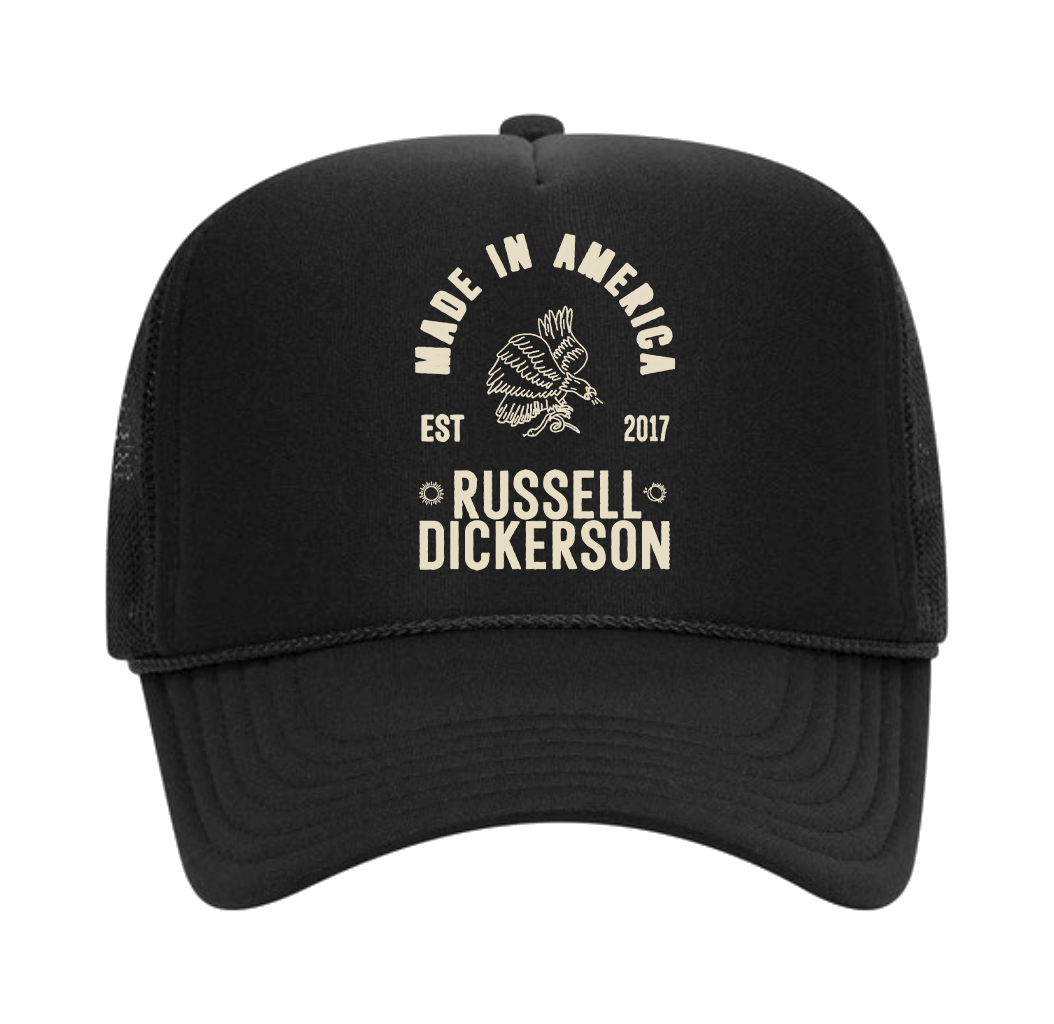 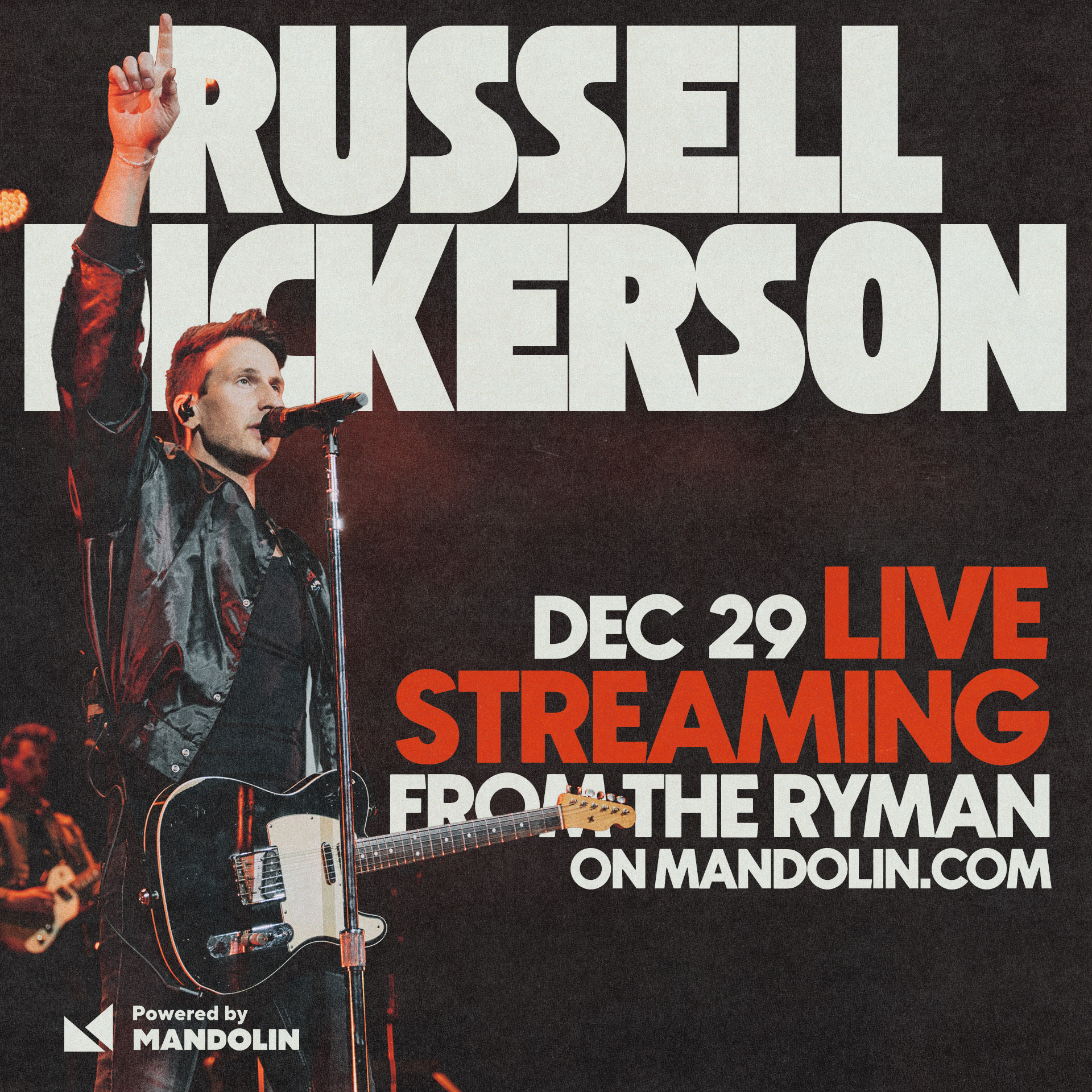 Russell Dickerson Live Stream From The Ryman
Playing the historic Ryman Auditorium was one of the most amazing moments of my life. One of those you just want to live again. Well… now we all can!! Get your tickets to livestream the RD Party on December 29th on Mandolin! VIP opportunities are also available! Get details and tickets HERE.
Read More 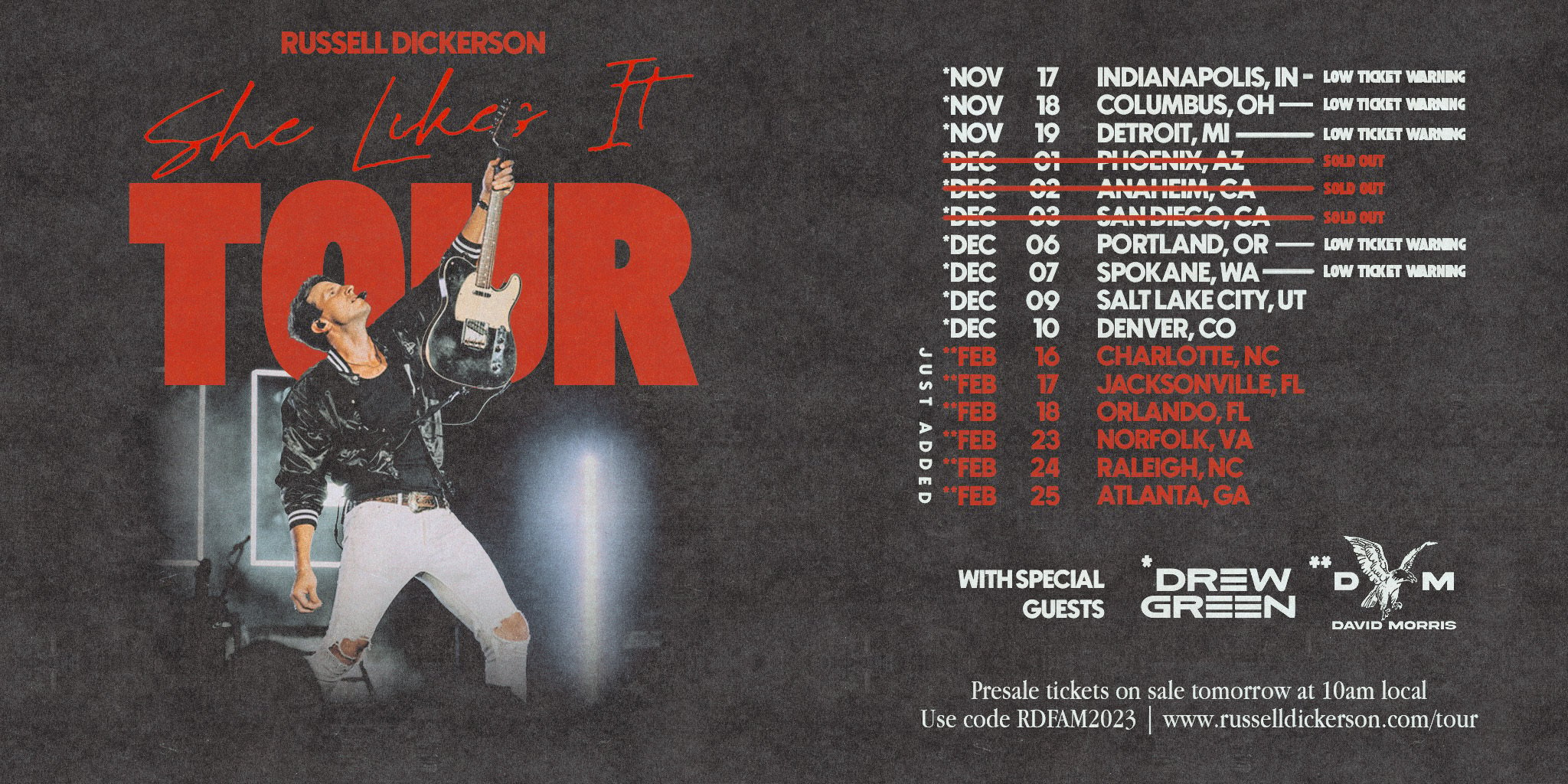 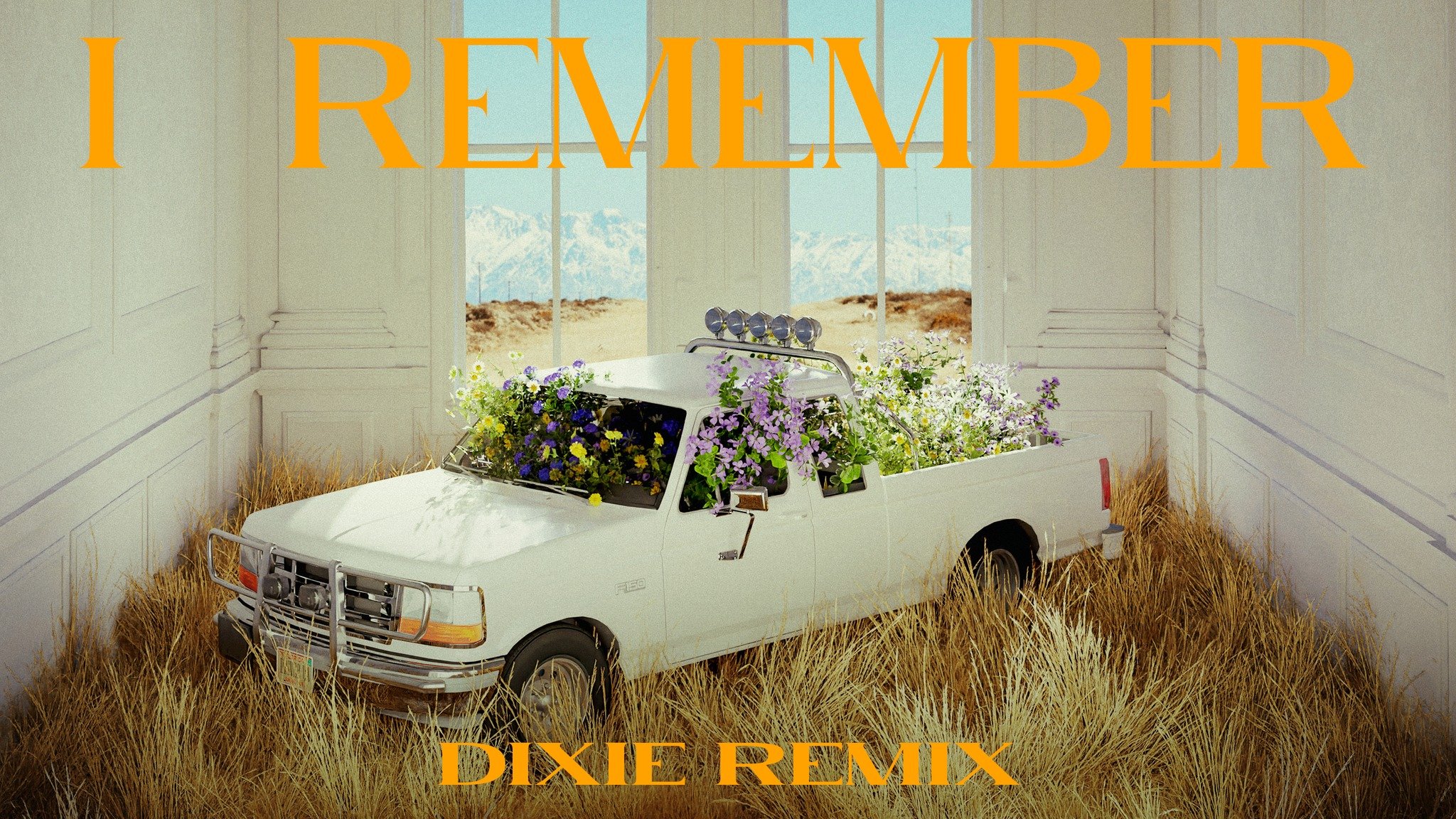 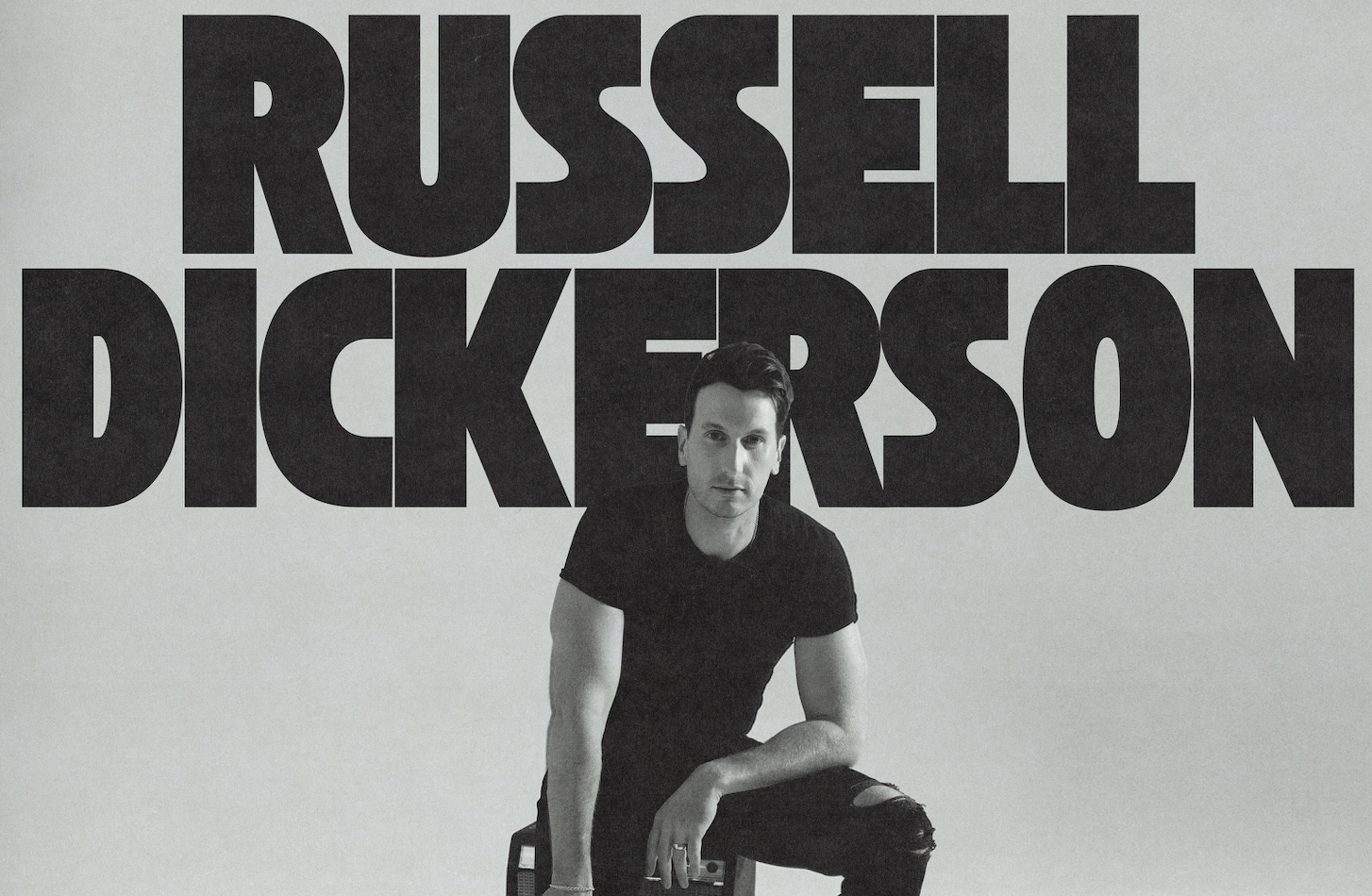 Russell Dickerson, The Album, Out Now!
Russell Dickerson, the album, is out now! Listen to the third studio album from RD featuring “She Likes It”, “I Wonder”, “Big Wheels”, “Blame It On Being Young” and more. Listen HERE!
Read More 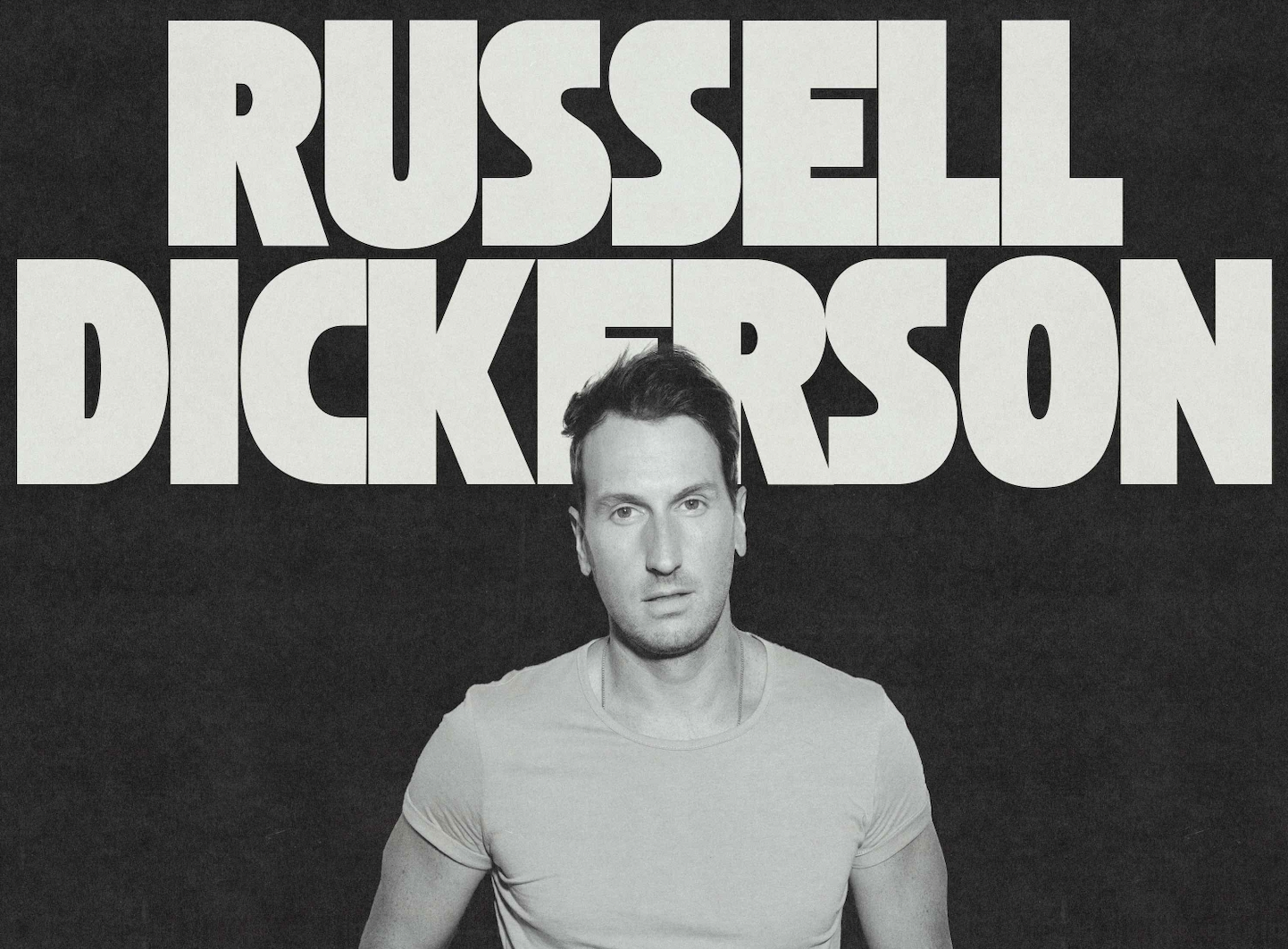 “Blame It On Being Young” – Out Now
More new music! “Blame it On Being Young”, from Russell Dickerson’s upcoming self-titled album, is out now! Listen HERE. Pre-order the new album and listen to new music now. RD3 is coming November 4!
Read More 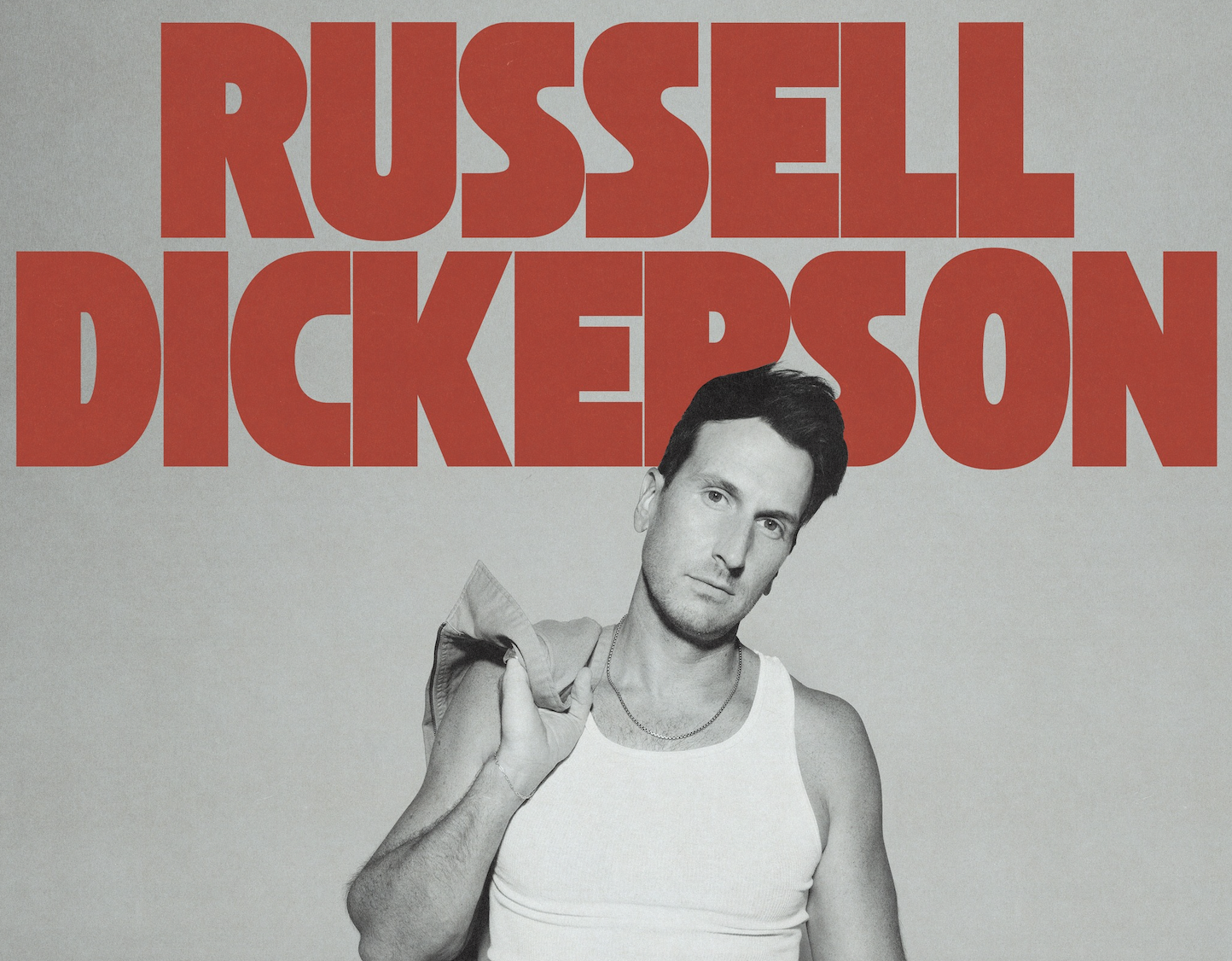 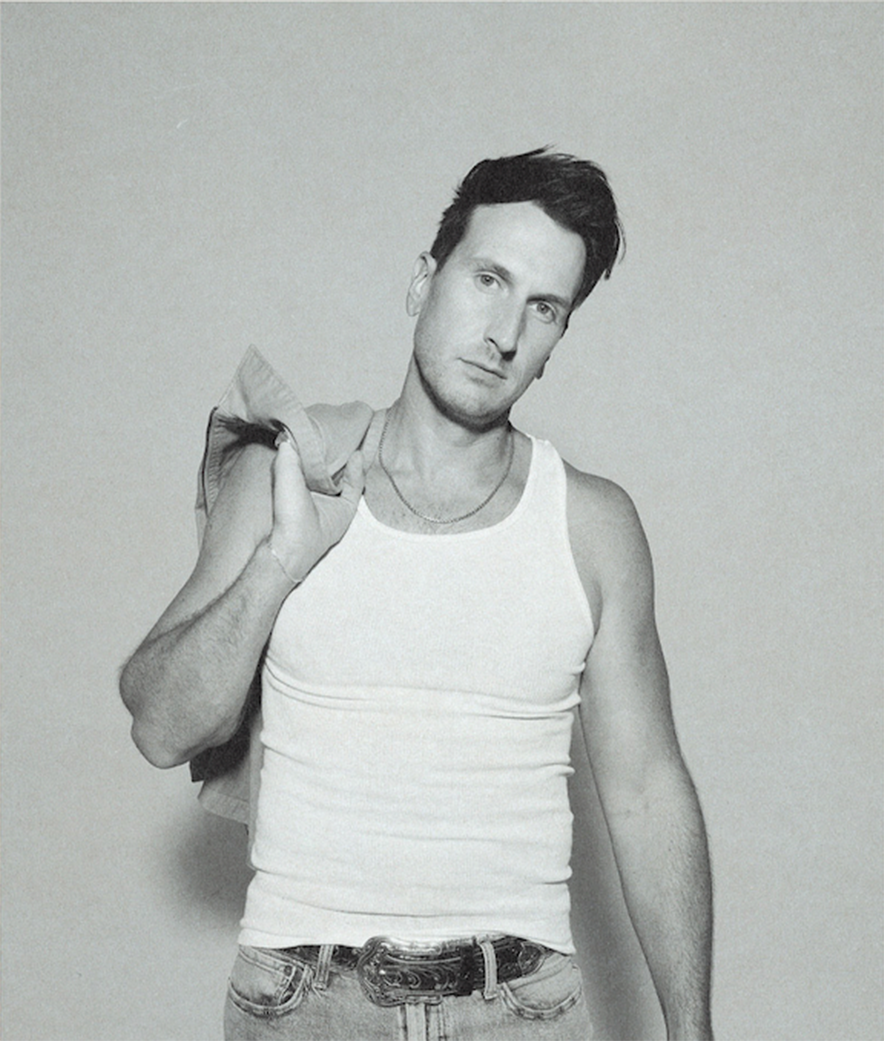 A Tennessee native from a musical family, there’s no question that Russell Dickerson has made a name for himself in recent years. After graduating from college, Dickerson felt called to take his music on the road, cutting his teeth while playing shows across the US, frequently for small audiences and an even smaller paycheck. That same drive has made Dickerson the first artist to release four consecutive career-starting singles that reached No. One on the Biillboard Country Airplay chart since Luke Combs. He also joins Combs as the second solo artist and fourth act overall to have four or more singles reach No. One on the Country Airplay chart since its inception decades ago. Those back to back chart-topping singles include “Yours” (3X Platinum), “Blue Tacoma” (2X Platinum), “Every Little Thing” (Platinum), “Love You Like I Used To” (Platinum) and most recently Dickerson’s current single “She Likes It” ft. Jake Scott has already been certified Gold with 170 millions streams to date. This Fall, he will embark on a sold-out tour in the UK and headline a tour throughout the US starting in November.

When it all goes right, an artist’s third album is something special. The point where inspiration meets empowerment, everything comes together, and a creative revelation is born. And for Triple Tigers Records country star Russell Dickerson, that is absolutely the case.

Marking the follow up to a series of hits, each one burning with the intensity of a romantic blowtorch, Dickerson’s self-titled LP3 takes that same heat and lights bold new fires, all over his life.

Soul-mate symphonies wrapped in epic country devotion. Rural R&B bangers with all the swagger of a free spirit, plus the steady hand of a family man. And stadium sized small-town anthems, built on forever-young thrills yet tempered by the wisdom of time. It’s the work of a superstar on the rise who’s already been rewarded for opening up his soul, and is now giving fans the full picture.

“After finally having some success, there’s a pressure for sure,” Dickerson admits. “But there’s also a new freedom, too. I trust my instincts, and now my instincts are telling me to just to be 100-percent me, and creatively just let it flow.”

A Tennessee native from a musical family, those instincts have always guided the singer-songwriter – all the way from church choir to coffee-house gigs and eventually Music Row itself. But following his gut wasn’t always so cut and dried. Taught piano early on, he took up drums in high school and formed his first band, trading athletic promise for the rush of the stage and growing into an intoxicating performer. A dynamic front man who lifts crowds up on his own wild-eyed energy, with a near superhuman ability to translate fluttering hearts into musical notation, Dickerson grew up in the shadow of Music City, a kid who counted himself a student of the ‘90s and 2000s country giants. And yet, it took forgetting everything he knew to find success.

It was just after graduating from Nashville’s Belmont University that Dickerson first hit the road. Wielding an independent spirit and a rich vocal – plus a drive to succeed and an SUV – he’d pack up and head out with his self-written songs, often relying on his wife Kailey for not just inspiration, but photography, video production and more. As the odometer racked up miles, though, it became tough figuring out “something country fans would like,” Dickerson admits. But still, he forged on.

“I told myself ‘I’m just gonna keep going,” Dickerson explains. “‘I’m gonna keep driving my run down SUV all across America playing for 25 people and 250 bucks a night, until something happens.” Something did happen, of course, but not the way he expected. Dropping the idea he could figure out what fans wanted, Dickerson instead embraced what he liked, and 2015’s “Yours” was the result.

A total surrender to true love that is now a 3X-Platinum Number One, “Yours” was a creative breakthrough, a torrential downpour of devotion followed by three more Platinum chart toppers in the same vivid, personal vein – “Blue Tacoma,” “Every Little Thing” and “Love You Like I Used To.” Dropping two albums – Yours and Southern Symphony – streaming numbers soon hit 2.2 billion and led to tours with Thomas Rhett, Lady A, Kane Brown, and more, plus a reputation as one of country’s hottest new talents. And crucially, it sparked a whole new confidence.

Dickerson’s third album finds him doubling down on love songs with uncommon romantic depth, building whole galaxies of awestruck wonder around a single moment spent loving his wife. But he’s also become a father, welcoming the birth of son Remington in 2020. And like all of us, he’s come to appreciate friendship and connection more than ever.

Spurred on by pandemic isolation, he spent the majority of 2020-2021 putting pen to paper, drawn over and over to those three simple topics – love, family, and friendship. Taking stock of how far he’d come (and the everyday joys that still meant so much), 15 tracks were chosen – all co-writes with the likes of Ashley Gorley, Jon Nite, Chase McGill, Lori McKenna, and more. And then Dickerson turned to the studio.

Co-producing with Dann Huff, Zach Crowell, Casey Brown, Josh Kerr, Ben Johnson and Alyssa Vanderhym, Dickerson captured that “100-percent me” element by freely fusing different genres and different eras into country textures just as vibrant as his big personality – and they certainly stand out, even in today’s format.

The first and most obvious example was “She Likes It” (with Jake Scott), a slinky, lusty slow groove with an unapologetic R&B sound so bare it’s almost naked – and therefore a forbidden thrill – with Dickerson going step-by-step in a hot-blooded build up of passion. “It’s so simple. It’s so clean. It’s so relatable,” he says. “I think that’s why the song has done so well, is just that refreshing minimalism.”

The track arrived in 2021 and is now climbing the Billboard Country charts –  and looking like another game-changing hit –  but elsewhere Dickerson takes love out of the equation, taking the same authentic approach to nostalgia that he does to romance. Chest-thumping tracks like “I Remember,” “Blame It On Being Young,” “All the Same Friends” and “Beers to the Summer” capture forever-young fun like a country-pop polaroid, while “Big Wheels” revs up a gravel road guarantee that he’ll never get beyond his raising.

“I still got that redneck blood in me,” Dickerson says with a laugh, describing a country-trap anthem which wears its rougher edges with pride. “I still love some big wheels and back roads. That was my life, my upbringing, my musical taste. … And on top of all that, it’s just a banger.”

Likewise, passion still courses through the veins of Dickerson’s love songs, feeling just as tactile and adventurous as ever. “She’s Why” captures the playful side of a mature relationship in that same flirty minimalism as “She Likes It.” And with “18,” Dickerson taps into pulsating ‘80s pop, using the throwback energy to imagine going back in romantic time. But for as much fun as Dickerson has – and anyone who’s seen him live knows that’s a lot – his straightforward honesty shines brightest.

Tracks like “God Gave Me a Girl” follow the same blood-rushing arteries as his heart-pounding breakout hits. The epic “I Wonder” gets lost in the what-ifs of an ill-advised breakup with Kailey back in college, and in the quiet ballad “Just Like Your Mama,” all that would have been lost becomes clear.

Tender and presented in tribute to both his wife and son, the track revolves around a simple wish that any father can relate to – but only Dickerson could write. Now three albums in, it’s proof positive that “RD” has found his mark, and hearts-on-fire authenticity is the name of his game.

“No matter how far we get into this, I want people to know it’s still me. It’s still RD,” he says. “I’m still the hyper, outgoing, fun-loving, crazy dude on stage. But also these songs are so meaningful to me. It’s not all hype and smoke and lights. I am a songwriter, and no matter where country music goes, I’m not chasing anything except Russell Dickerson.”